Failure is the Only Option 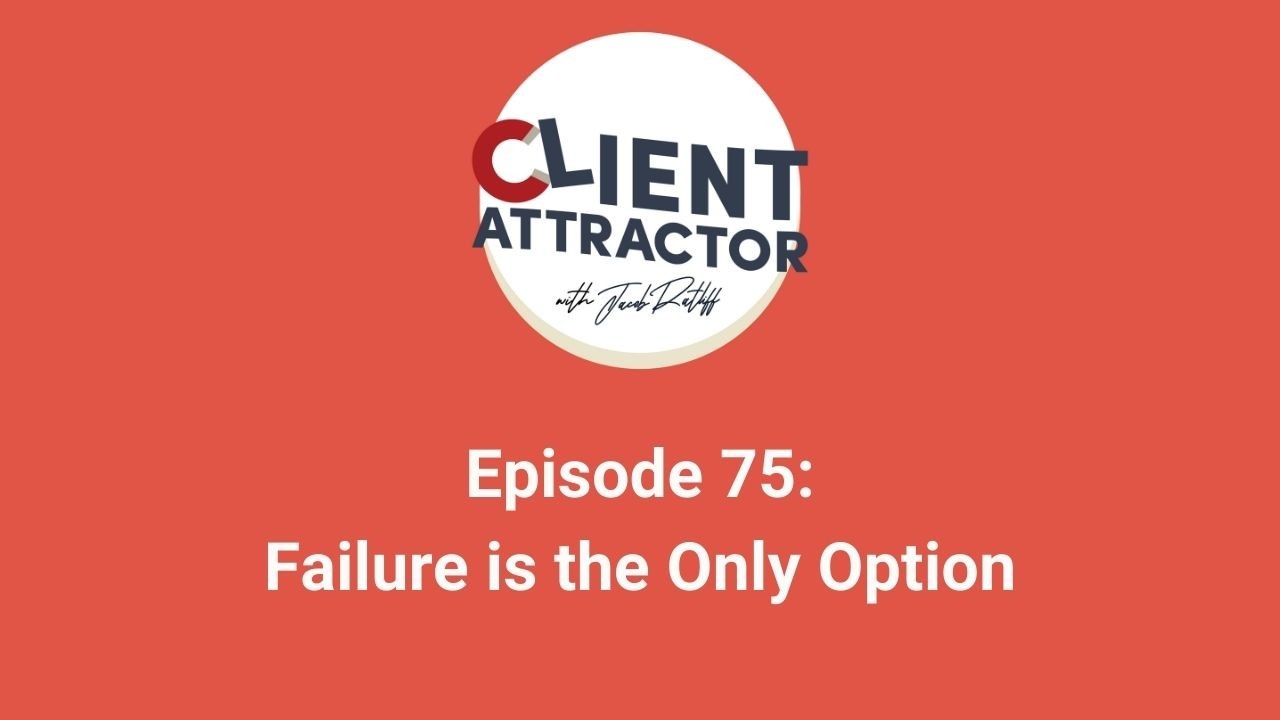 We know that as entrepreneurs, failure is inevitable—we will fail, make mistakes, and experience low points. And it'll happen over and over again. And the difference between successful entrepreneurs and the entrepreneurs who give up...is their ability to reflect, think, and adapt in the wake of failure.

In this episode, I talk about how I've handled failure in the past, and how I use failure as an opportunity to grow both as an entrepreneur and as a person.

Hello, and welcome to the Client Attractor Show, where we talk about concrete tactics and strategies that you can use to attract your dream clients. I'm your host, Jacob Ratliff, client attraction coach and author of the new book Client Attractor. If you've not gotten your copy yet, you can pick that up today at Amazon, Barnes and Noble, or clientattractorbook.com.

In today's episode, I want to talk about failure because this is, personally, something that's been top of mind for me. You might have seen it recently, as I've shared some social posts and things around my own journey with anxiety and depression. That comes at a time when I'm also dealing with a lot of personal family stuff—illnesses within my family, illnesses that my loved ones are facing and that are putting their lives in jeopardy. All of these things combined have made the past few weeks or, really, the past couple of months really, really difficult for me.

I want to talk specifically about failure because, as these things have occurred, I have started to question the whole direction of my life. Where am I going? What am I doing with my life? The concept of failure goes hand in hand with that, for me, at least, because shifting gears or trying to pursue another passion or something is something that I would, personally, whether it's the right way to see it or not, see it as failure.

The problem, though, is that I have, for a long time, operated my life and my business under the philosophy that “failure is not an option.” We hear that all the time, and the truth is that since I started my business, well, since I've been alive, I have failed over and over and over again, such that failure is very much an option. Failure is, in fact, the only option because I've experienced it so much.

I think, perhaps, that philosophy of “Failure is not an option,” what it might be trying to say is that it doesn't matter how many times you fail, but it matters that you get back up and get going. But it doesn't come across that way, because when we don't see failure as an option, it becomes this boogeyman, this taboo thing that we don't want to talk about or think about, but we do want to avoid at all costs. But the reality is that we fail every day; we fail way more often than we would like to, such that, like I said, failure is the only option.

Now, the other thing that goes hand in hand with this conversation is this idea that however many percent of entrepreneurs fail—90% of small businesses fail, right? We see this statistic everywhere, and oftentimes, that statistic varies. I've seen 75%; I've seen 99%, but the concept remains the same: an absurd percentage of entrepreneurs, of small business owners, fail. It's important to know what that means, though. It means that a large percent of entrepreneurs fail and then accept that failure, or they fail and then they don't get back up and keep going.

That's a really important distinction because the truth is that 100% of entrepreneurs and small business owners fail, but it's that 1% or that 25% or whatever is that smaller percentage that actually learn from that failure and get back up and going. Personally, in my own experience, I have discovered that, really, the only reason that entrepreneurs give up—whether giving up for them looks like going and getting a job, or retiring, or doing something else—it is the result of experiencing some sort of failure and then, for whatever reason, deciding not to adjust or pivot and move forward.

Maybe that reason is that they're tired. Maybe they're discouraged. Maybe they're out of money. There's a million different reasons why someone could “give up” after experiencing failure, and I do not want to discount those reasons for not continuing to work on your business because those are very, very valid reasons to completely abandon the business and move in a completely different direction. But I do know that the most successful entrepreneurs, and the ones who I have the greatest respect for, are the ones who find it within themselves to keep going after failing over and over and over again.

Personally, I'm in the boat of people who are feeling like they're failing over and over and over again, but when I'm in that space—and everyone is in that space sometimes—what I have done that has been the most eye-opening is that I have looked at that statistic or thought about that statistic of however many small business owners or entrepreneurs “fail,” and I've reminded myself that everyone fails all the time, and if I don't want to be a part of that 99% who fail and give up, then I better get back on the horse and keep on going. I have been in those situations where I'm just too tired or just too discouraged to move on, and yet, ultimately, I have moved on. But I want to explain a little bit about that, because it's not quite that simple.

For me, the idea of just biting the bullet and forcing myself to get back up and get going, that has never worked for me. I know that it works for a lot of people, but for me, that has never been a successful tactic. What I have done, though, is take a step away from the entire business, from the entire project for several days, even a couple of weeks, and I have used that time to rest and rejuvenate so that I could come back at the end of that time period, get back on the horse, and keep going. It was never a question of “Okay, let me just take a break for two weeks and see how I feel, and then maybe I'll resume and keep on working on my business.”

No. In fact, it was “Alright, I'm gonna take a week off from my business, and when I come back on Monday, that next Monday, I am going to be raring to go full speed ahead, and we're gonna get. We're gonna do it.” This is not a vacation. There's a big difference between a vacation and what I'm talking about here, which is more of what I would call a retreat, space for renewal. It wasn't a time where I sat around on the beach getting drunk. No, it was not that at all. It was really focusing on taking care of my physical and emotional health so that when I came back to work, I would be in the best possible headspace to pick up where I left off on my business.

If I had to give one piece of advice on the topic of failure as it relates to entrepreneurship, it's that we know getting into building a business, we know when we get started, that it's going to be difficult. We're told over and over again that we're going to keep failing. We kind of anticipate that, which is good, honestly. At the same time, when you experience that failure, when you're actually experiencing it, it is nothing like what you could have anticipated. When you were in the early stages of your business, you were thinking, I know that failure’s going to happen, and when it happens, it's going to be bad. But when you're actually experiencing it, the word “bad,” for example, doesn't begin to describe it. It sucks. It is not a good feeling.

The piece of advice that I have for you is don't even be thinking about how bad it's going to be when it happens because whatever you anticipate is not going to be the reality of how it actually feels. Instead, focus on “Okay, when I experience failure, what am I going to do?” Then, go ahead and start to have an action plan for what you're going to do when you start to experience a failure in your business or in your life, for that matter. Do that instead of sitting there worrying, “I'm when I'm experiencing it, it's going to suck.” Don't do that. Go ahead and plan for it.

For me, that's what's been the most valuable and most useful. Also, remembering that it is still going to happen, and that's going to happen over and over again. It's not about how that failure happens, what that failure is; it's about what that failure informs, how that failure teaches you. When you experience failure—and it sounds cliché to say it, but I'm going to say it anyway—it's an opportunity to reflect, think, and then change the way you're doing things. The reason it's cliché is because it is so important, and it is so commonly said. But the reason it's so commonly said is that, despite it being cliché, people still don't seem to grasp that. A lot of people still don't seem to grow from their failure. And so, if you're hearing this advice over and over and over again, maybe you need to pay a little bit more attention to it and not tune it out as just another cliché piece of advice.

Thank you so much for joining me for this episode of the Client Attractor Show. I look forward to seeing you on our next episode, and until then, take care.