How I Recorded 75 Podcast Episodes in 75 Days 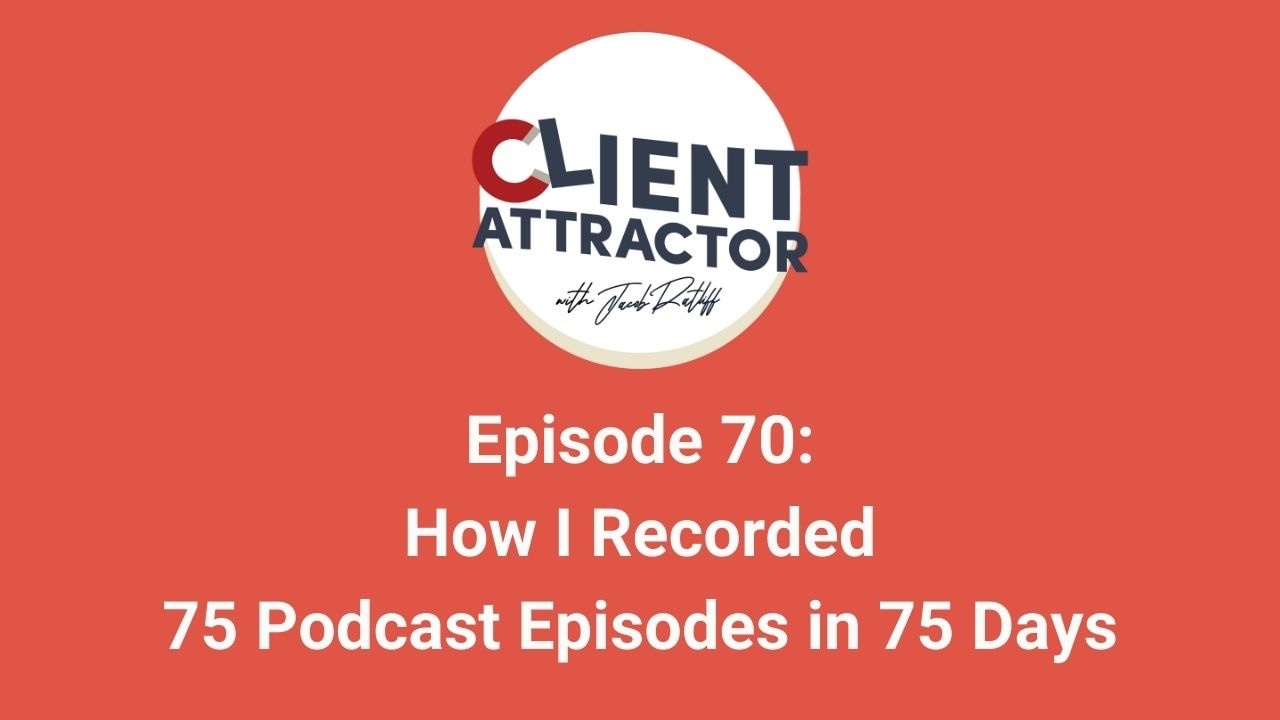 Creating content can be hard enough, and creating and publishing it consistently is even more difficult. In this episode, I talk about how I manage to create so much content all that time, including how to come up with content topics/ideas, how to repurpose and repackage content, and how to make sure you’re doing it consistently.

I was actually kind of struggling with what today's episode was going to be about. I'm at this point where I have recorded about 75 podcast episodes so far this year, and the question becomes, “What content do I need to create next? What ideas can I still talk about? Where should I go next in terms of what I'm talking about on this podcast, and not just what I'm talking about on the podcast, but what am I talking about on social media, on my blog, just anywhere that I'm putting out content?” That's why, today, what I want to talk about is how I am able to create so much new content all the time.

I will own 100% that I'm so proud of it, that I have been a content powerhouse. In the past year, over the past 12 months, I have recorded about 100 podcast episodes total, I have written a book, and I have put out social media content every single day. That's a lot of content. At the same time, I know that a really big pain point for a lot of entrepreneurs is around content, is around how to consistently put out content, how to know what topics to write about or to record videos or podcast episodes about. So content is a big problem for a lot of entrepreneurs.

It's one that perhaps used to be a problem for me but is now one of my strongest parts of my business. That’s why I want to talk a little bit about my system and how you can use parts of it, whatever works for you, to start creating content for your own business. There are three things that I want to talk about today that have been especially useful for me personally.

The first is how are we identifying the topics that we're going to create content about? What are we actually going to write about or record episodes about? What are the topics? What has worked really, really well for me has been getting clear on three things. The first is the specific mistakes that my ideal clients are making. If I were a self-love coach, for example, sure, one of the mistakes they are making is that they're not loving themselves enough, but that's not quite specific enough. We want to actually identify the mistakes they're making that fall under that umbrella of the larger mistake or problem of not loving themselves. What are the concrete things they're doing on a daily basis, for example, that are reinforcing that problem where they don't love themselves enough?

The second thing I do is, after getting clear on the mistakes, what are the problems they're having? In the same vein, what are the very specific problems they're having on a daily basis that are getting in the way or holding them back? The third place I look is at what questions my ideal clients are asking about themselves, about their lives, about what they should be doing. What questions are they asking? What I do with these three things is start a massive brain-dump of what I think they are. I also talk to people who I know fit the profile of my ideal client to basically say, “Hey, is this true? Are these the problems you're dealing with?”

The other way that you validate what you think those problems and mistakes are is to start creating content around those mistakes and problems and questions. Once you start creating content, if it's getting in front of the right people, you can measure how it's resonating based on the engagement that you're getting on that content. You start by just brainstorming and just doing a brain-dump of all of these things, getting as specific and concrete as possible. Each of those things that you write down could potentially be a topic for a social media post, a video, or a podcast episode.

That brings me to the second main point that has helped me create content every single day over the past three or four years. I've had to become an expert in repackaging and repurposing content. To start off talking about this concept, there's two things that are really important to understand. The first is that every time you say something, or every time you put a piece of content out there, it does not have to be something new. You don't have to only put out brand new ideas in your content. In fact, it's usually better if there is a fair amount of repetition in what you're saying. If you talk a lot about concepts A, B, and C, those are the three central ideas to your audience. Don't feel the pressure or pressure yourself to brainstorm topics D and F when you can stick with A, B, and C. There is value in repeating the same things pretty much over and over again, largely because it reinforces them, but it also just makes things a whole lot simpler.

The second thing to really understand is that it's not just about putting out new ideas every single day. It's that once you create a piece of content, say, a social media post, that piece of content is not dead. That piece of content can be used on other social platforms. It can be used on the same social platform several months or a year down the line. It can be repurposed into a blog article, to a podcast episode, or to a video. There are a lot of ways that you can take the same piece of content and use it over and over again. For example, there are several chapters in my book that really started as social media posts. I said, “Okay, what if I flesh these ideas out a little bit more?” and that's what ended up in the book. And I talked about those same concepts and covered some of those same topics here on this podcast episode.

I have really become the master of repurposing and reusing content, which has made it so much easier. I'm not just creating something from scratch every single day of my life. I am building assets, content assets, every day that I might not just use that day, but a million times in the future as well. That is such a huge piece of the content creation game because if you're trying to come up with new ideas and create new content from scratch every day, you're going to burn out really, really quickly.

The third thing that I want to talk about that has been a big part of why I've been able to create so much content and been able to do it so consistently is that I spend a certain amount of time on it every single day. Sometimes I spend 10 minutes on it. Sometimes I spend one or two hours on content every day. While I was writing my book, for example, I was spending five or six hours a day on content because I was working on the book, but that's kind of an anomaly because that's an isolated project.

But in terms of the podcast and social media posts and blogging, I usually spend about 10 minutes to an hour every day. Sometimes it's “Okay, I'm just going to hop on and record a 10-minute podcast episode, and that's it,” but the important thing is to do parts of it every day. It's important to be creating something every single day, no matter how small it is, even if it's just a short social media post or a short podcast episode, and even if it is repurposing content you've already created. For me, it's been important because it's honed and defined my content-creation muscle.

Sitting down and writing a social media post, for example, used to feel like torture. It would take me at least an hour, if not longer, and I would obsess and obsess over it. I would finally post it, and then my immediate next thought was, Oh, my goodness. I have to do this again tomorrow because I need to post something on social media tomorrow as well. Yeah, that was a big, big struggle, but I kept doing it. Day One, it might have taken me an hour. Day Two, it might have taken me 45 minutes, then 30 minutes. Now, I’m to the point where I can write strong, good social media posts or plan out a really strong podcast episode in 10 minutes.

It really is the logic of honing a muscle because the more you do it, and the more you do it consistently, the easier and quicker it's going to get, such that when I started this particular podcast back in January, the idea of recording an episode every day was intimidating. But it felt doable because I have this repertoire of things I can talk about and because I know that, while the episode I record on January 1 might take me three hours between recording and getting it up and everything, now, recording and getting a podcast episode out takes me around 20-to-30 minutes because I have honed that muscle such that it is so much easier than it was before.

In conclusion, when it comes to creating social content or creating content in general, and creating a lot of it, there are three things that have been really important for me that have also, in working with clients, been important for them as well. First, get clear on the topics; do that brain-dump or that brainstorm of mistakes, problems, and questions. Second, be really intentional about how you're reusing and repackaging content and building those content assets, rather than treating a piece of content as disposable. Third, consistency—spending some amount of time on it every single day, and really honing and defining that content creation muscle.