How Networking Can Waste Your Time 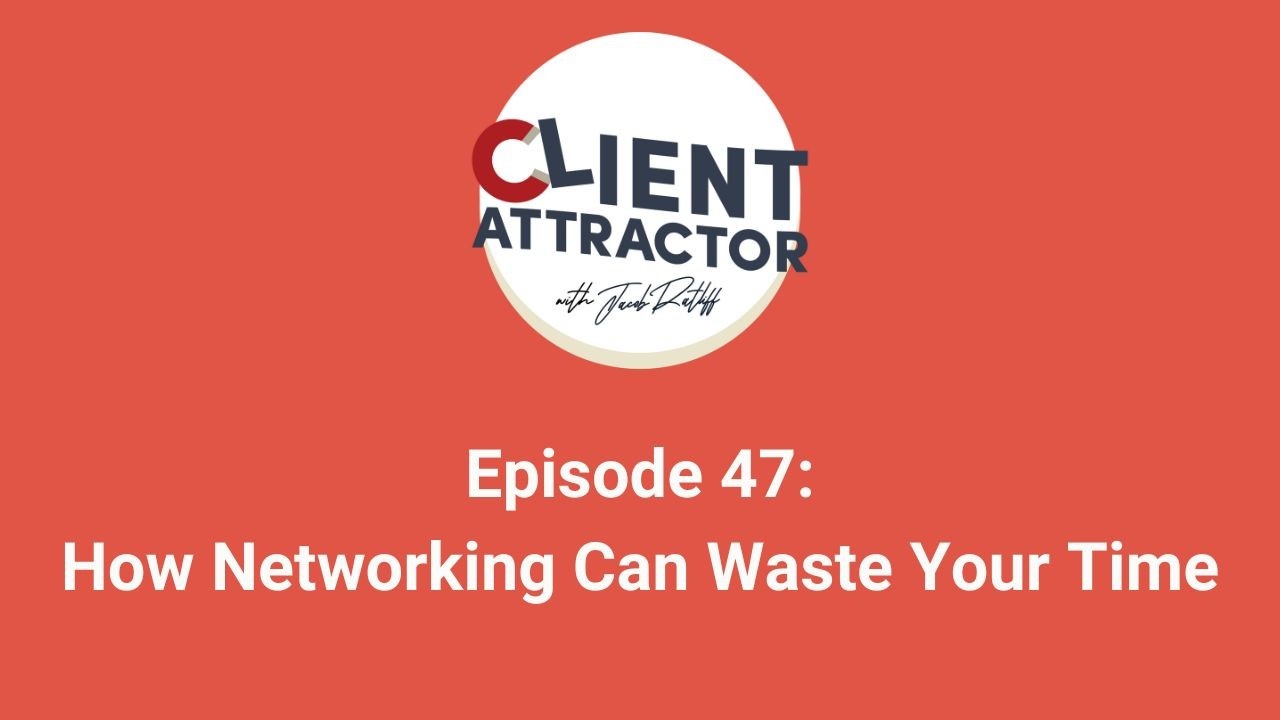 Networking—whether going to a networking event or just setting up a coffee chat with a new LinkedIn connection—can be such a great way to grow your business, get new clients, and create mutually beneficial relationships.

The problem, though, is that most of the networking that happens is a complete waste of time.

In this episode, I talk about how networking can waste your time and energy—ultimately resulting in hundreds of shallow connections that aren't going to go anywhere. More importantly, I talk about a new way to network...a more intentional way of networking that can help you connect with the right people, build the right relationships, and get the right referrals.

Hello, and welcome to the Client Attractor Show, where we talk about concrete tactics and strategies that you can use to attract your dream clients. I'm your host, Jacob Ratliff, client attraction coach and author of the brand new book Client Attractor. If you've not gotten your copy yet, you can pick that up today at Amazon, Barnes and Noble, or clientattractorbook.com.

In today's episode, I am going to be talking about how networking can be a massive waste of time and energy in your business. Before I get started, I know that is a really bold statement, and I know that it's going to make a lot of people angry and upset, so I want to add a little bit of nuance to this conversation before we really get started. First, networking can be a great way, such a good way, to expand your circle and connect with prospective clients. I don't deny that, and honestly, networking is what has gotten me a lot of my initial results in my business, but the way that so much networking gets done is a complete waste of time.

In this episode, I'm not going to be talking about how awful networking is and how you shouldn't do it, but I am going to talk about a different way of going about networking, a more intentional way of networking, so that—whether you're going to in-person networking events or just setting up a networking call or connection call with someone on LinkedIn—you can be much more intentional about how you go about it, and it can actually benefit your business, rather than just waste a lot of time and energy.

To get started, let's talk about some of the problems with “networking,” as it is done largely today. The biggest problem is that it's so often about blindly connecting with new people, regardless of whether it makes any sense to connect with them in the first place. Part of this comes from this idea, or this myth, that any connection is a good connection. That might be true to some extent, but if you take it as an irrefutable truth, you're going to have a lot of connections, but only a tiny percent of them are actually going to be mutually beneficial.

As entrepreneurs, some of our biggest, biggest assets are our time and our energy and our focus. If we are treating any connection as a good connection, without discrimination, then we are letting that time, energy, and focus go off in a whole lot of different directions that aren't going to help get a return on investment, wherein what you're investing in this context is not money, but your time.

The second big myth that gets treated as an irrefutable truth is that networking will get you referrals. Yes, that is so true, but you actually have to be talking to the right people in the first place. For example, early on in my business, I was attending a lot of networking events at my local chamber of commerce, and I was connecting with a lot of people, but none of them were my ideal client, and none of them were actually connecting with my ideal client on a daily basis. It didn't matter, at the end of the day, how much of a relationship I built with these business owners in the local Asheville area. I wasn't going to get any referrals from them, because they were not in the same sphere of business as I was, so I wasn't talking to the right people, so I was not getting any referrals at all.

The third problem with networking, as it is largely done today, is that most new connections—whether that's at a networking event or during a networking call-in, with “Okay, let me know if there's any way I can support you,” or, “We'll keep in touch, or, “If I see anyone who I think would be a good fit for you, I'll point them your way”—nothing at all ever comes out of these. Even when you are creating connections, and even if they are potentially good connections to have, nothing comes out of them. That's a huge, huge problem, because it pretty much stunts the entire networking process and keeps you from getting any forward movement on any front.

The fourth and final problem with networking that I want to highlight is specifically in the context of the coaching industry. That problem is all around coaches networking only, only only with other coaches. This becomes a really big problem for several reasons. First, it creates this insular community, wherein you're only connecting with people who are already in or around the coaching industry, in the coaching space, and you're not accessing people who are outside of that, many of whom need coaching. Now, this could be good for you if your primary ideal client is a coach, but for a lot of life coaches and mindset coaches out there, they're not necessarily trying to coach coaches.

The second problem with that is that it feeds this “coaching pyramid scheme” that so many coaches are actively critiquing and trying to move away from, this idea of coaches who coach coaches who coach coaches who coach coaches, all the way down. If the only people you're connecting with are coaches, then you're actually perpetuating that problem, no matter how much you critique it on a daily basis. Again, I'm not saying that if you're a coach who does not serve coaches, that you don't want to be connecting with coaches. You absolutely do; it is important to build that network. But you don't want to only be networking with other coaches, because that, at the end of the day, is not just going to perpetuate this coaching pyramid scheme that we all hate, but it also stunts your business growth, because you're all competing for the same tiny pool of clients, and that's not going to help anyone.

With all of that said, what is a more intentional way to network? What is a more effective way to grow your network in a way that actually fuels your business growth, rather than just sucks your time and energy? Well, there are three points I want to highlight that start to get to this idea of a more intentional way of networking. The first is to put yourself in the right circles.

To talk about this, I want you to envision a Venn diagram with three circles. One circle is you. Another is your peers, so these are the people that you would be networking with. The third circle is your ideal clients. If you put together a Venn diagram with those three circles, you're going to have that spot in the middle where the three overlap, and that is the circle that you need to be in, that little spot of overlap between you, your peers, and your ideal clients, where you're connecting with people where there's already a clear common ground.

The second point of intentional networking to be focused on, as you're building these connections, is turning the conversation into action and not letting it fall off and be “We’ll keep in touch,” or, “If I see someone who I think would be a good fit for you, I'll send them your way.” We want to take a more active approach and turn that conversation into some real action, and there are a million different ways you can collaborate in a way that's mutually beneficial. Ultimately, if your conversation is ending with “We’ll keep in touch,” then it has not been a very productive networking interaction.

Obviously, there is a lot more that goes into effective and intentional networking, but if you can really focus on those three things, that's going to save you so much time and energy, because it's going to prevent you from wasting that time going to networking events it doesn't make sense for you to be at in the first place.

To wrap up today's episode, the takeaway I want to leave you with is that, as you're building your professional network, as you are growing your business, make sure you're putting yourself in the right circles, not just into any circle you can get into. Make sure you're connecting with the right people in those circles, and make sure you're turning that conversation into action and into long-term, mutually beneficial relationships.

As always, thank you so much for joining me for today's episode of the Client Attractor Show. I'm your host, Jacob Ratliff, and I look forward to seeing you tomorrow for our next episode. Take care.