How to Structure Your Sales Conversations: Part I 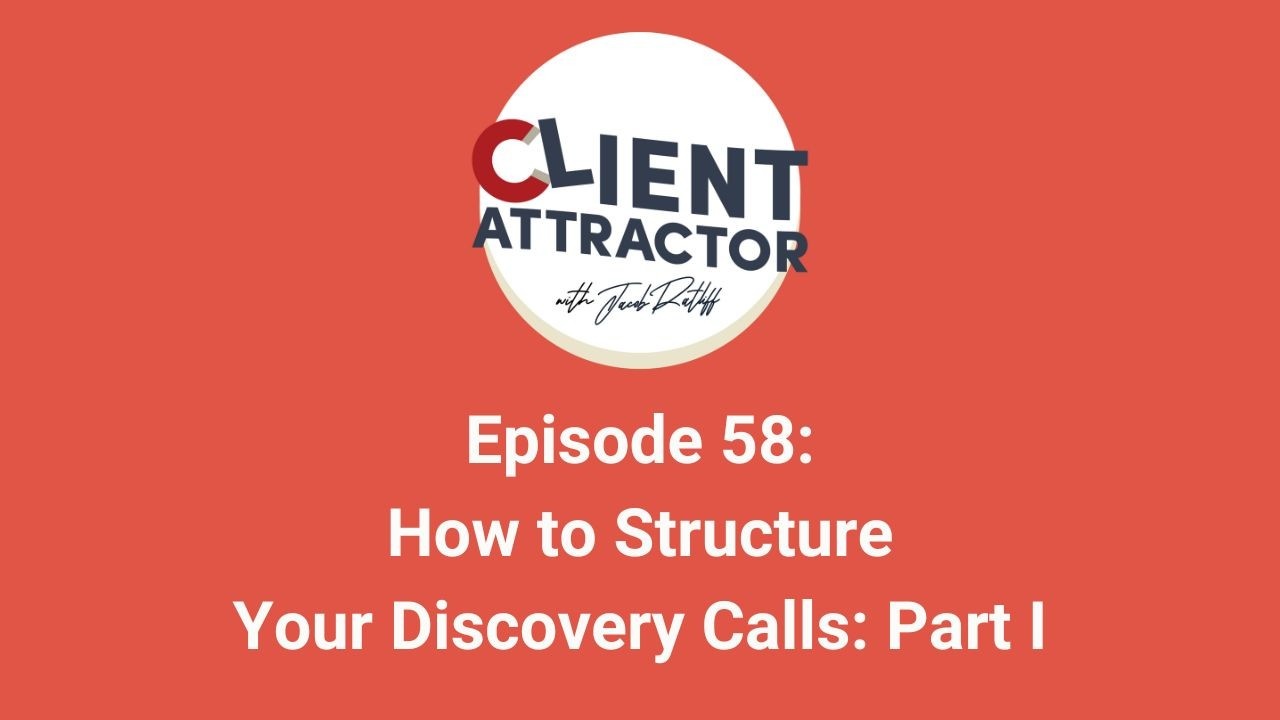 You've probably seen all sorts of marketing and sales gurus out there giving away or selling their "proven 7-figure sales script," where, if you follow this script word by word, you'll close new clients every single time. You may have even tried one of these scripts, and found it sorely lacking...maybe because it was full of high-pressure sales tactics, or perhaps because it just didn't sound like you.

There's a reason for that: Someone else's script is NOT going to work for you. Sure, it may have made them millions of dollars, but that doesn't mean that using it is going to get you the same results.

Rather than giving you another sales script that just isn't going to work for you, in this episode I share with you a structure for conducting effective strategy sessions or discovery calls...giving you a general outline that you can use to sell more effectively in a way that feels natural and authentic to you.

In today's episode, we are going to be talking about how you can structure your sales conversations to be the most effective. You've probably seen, in the past, sales scripts that people are selling or giving out that say, “This is my seven-figure sales script that's going to help you close new clients every single time,” and what we're going to be doing here is taking a slightly different approach. I'm not going to give you a script, but rather walk through the general structure, an outline, of what that call should look like, so that you can then go back and figure out how to work through this outline in the way that makes most sense for you.

In this episode, we are going to do an overall look at the different steps. We're not going to dive too deeply today into all of them, but we will dive into the first few of them in some depth. Then, in the next episode, we will continue this conversation and talk more in depth about the rest of them.

The sales conversation consists of eight consecutive steps, and each one serves a very specific purpose throughout the conversation, and when well executed, these steps combine to fulfill the larger purpose of the strategy session or discovery call itself, which is to understand your prospect’s situation and to present a solution. The first step is to open and set the agenda, which really gets the call started and set expectations about how the call is going to go. The second step is to understand why they're here in the first place, to identify what the prospect wants out of the call, and why they scheduled it in the first place.

Once you have that high-level understanding of their needs, it's then time to transition to the third step, which is to really try to understand their situation. In this step, you really dive more deeply into where they are now and ask questions to get the full picture of that current situation. Once you have that more nuanced understanding of where they are now, you can move forward to the fourth step, which is to unpack their pain. During this part of the conversation, you explore how their situation affects them and the different areas of their life or of their business by asking really focused questions.

On the flip side, you also want to identify their desires, which is the fifth step. This is when you uncover what they really want in their life or in their business, and again, how achieving that would impact every aspect of their life. And once both you and the prospect have the entire picture, really understand the entirety of what's going on, it's time to get real and ask the hard questions to create responsibility: you identify their goals and desires. In this stage, it's time to find out what has stopped them from achieving their goals in the past and then to help them take the responsibility required to move forward and achieve them.

This takes us to the seventh step, which is to highlight the gap. The purpose of this is to summarize the entire conversation that you've had so far and show them what's missing between where they are now and where they want to be. At that point, you can move to the eighth and final step, which is to share your offer. If they're interested in working together, it's time for you to share your coaching program or your coaching offer and then enroll them, and then congratulations—you've just made a sale.

If all of those eight steps seem a little bit overwhelming at the moment, don't worry, because in this episode, we are going to talk through the first few of these steps. Then, in the next episode, we're going to talk through the rest of them, and we're going to break down each one pretty concretely, so you can understand each part of the discovery call, because each of these eight steps is really important, and they build on each other. You cannot skip these steps as you are having your sales conversations.

Like I said, the first step in a sales conversation is to open and set the agenda, and when you are first getting on this call, there are three primary things to make sure you do that make a really massive difference later on in how the call will go. First, open the conversation by establishing some light rapport; just spend a few seconds opening the conversation with a friendly tone. This is as simple as, “Oh, where are you located again?” or, “How has your week been so far?”

The second is to establish the purpose of the call, which is really as simple as clarifying that they are here because they're interested in solving a particular problem, or making progress towards a specific goal. The third is to set the agenda for the call, which is just to explain briefly how the call is going to go. All together, this process is really quick and brief and should generally take no more than three or four minutes. This should not be somewhere where you're dwelling and spending a lot of time. But that doesn't mean that these three or four minutes aren't important, because in fact, they do dictate how the rest of the call is going to go. It establishes a relationship between you and the prospect; it ensures that you're on the same page; it establishes leadership; kind of communicating that you are the expert who is conducting the call; and it sets up expectations for what the call is going to look like.

So make sure you go through the steps in this first piece of the call, and keep the language informal and friendly, because at this point, it's really all about establishing the tone of the call, and easing any worries the prospect might have about finding themselves on a high-pressure sales call, because if you're listening to this podcast, high-pressure sales are probably not your thing.

The second step, which is the last one that we are going to cover in this episode, is to understand why the prospect is here in the first place. This is when you begin to transition into the real “meat” of the call, the part where you dive into their current situation and how it's affecting them. In the previous step, you clarified the overarching purpose, but in this part, you're going to begin digging a bit deeper to better understand their motivation for being on the call. When you fully understand your prospect’s motivation, you begin to see layers of the situation that are below the surface—why it's an issue they want to solve, rather than just something they are willing to live with.

Again, this is a fairly quick step, and I recommend going two levels deep after the initial question. What I mean by that is to ask an initial question, and then based on their answer, ask a follow-up question to get more detail. Then, do the same thing one more time, based on their second answer. The initial question you ask at this stage should be fairly simple and straightforward. This can be something like, “What motivated you to take the time out of your day to have a call with me?” or, “What would you like to get out of this call today?”

More important than the initial question, though, are the follow-up questions. While your prospect’s answer to the initial question may communicate their high-level motivation for scheduling a call, it's usually just the tip of the iceberg, and so your next step is to dig a little bit deeper with a couple of follow-up questions to see what's under the surface. This could be something like, “So you said, ‘XYZ.’ Could you tell me a little bit more about what you mean by that?” or it could be, “Well, how long have you been dealing with that?”

These are fairly simple questions, and you'll notice that there are a lot of different ways that someone could answer them, but the reason we use these general questions at this point is to allow the prospect to communicate anything that's coming to the surface for them. They may not even answer the question that you asked, but the way they answer it gives you a glimpse into their underlying motivation.

These have been the first two steps of a total of eight steps of the sales conversation. In the next episode, we are going to take a deep dive and look at the rest of the steps that happen during a discovery call or strategy session.