How to Structure Your Sales Conversations: Part III 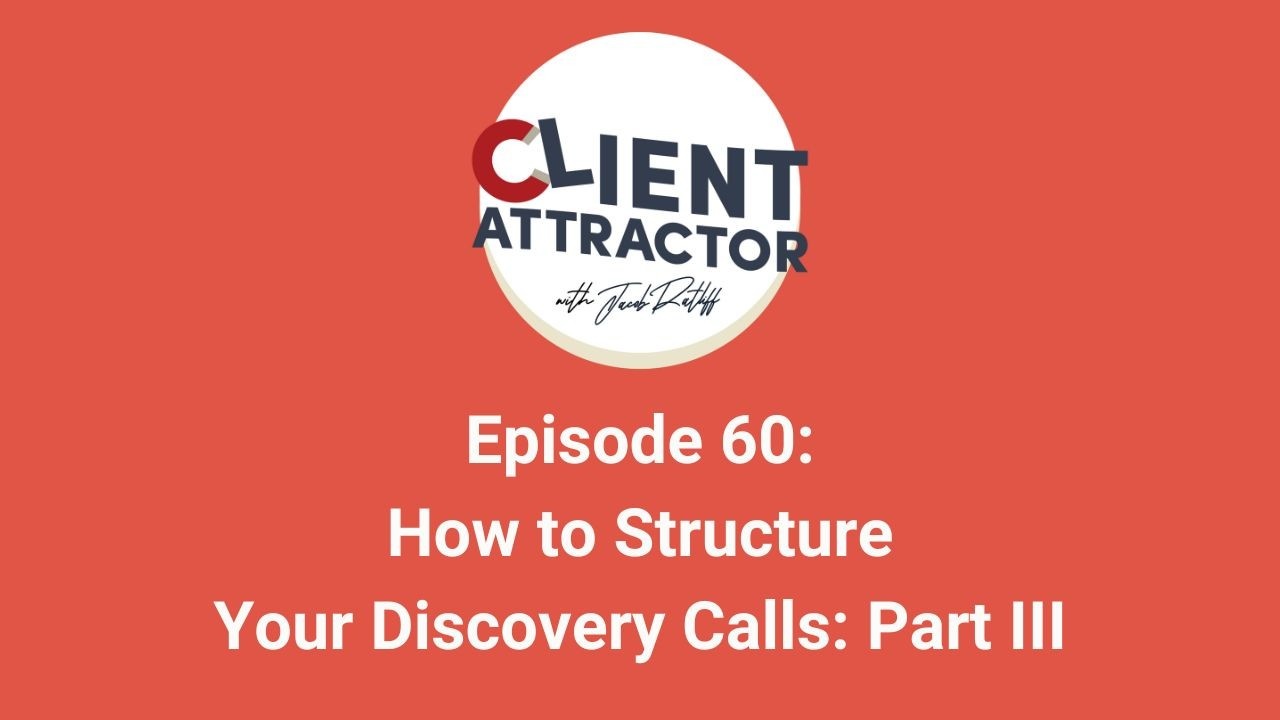 You've probably seen all sorts of marketing and sales gurus out there giving away or selling their "proven 7-figure sales script," where, if you follow this script word by word, you'll close new clients every single time. You may have even tried one of these scripts, and found it sorely lacking...maybe because it was full of high-pressure sales tactics, or perhaps because it just didn't sound like you.

There's a reason for that: Someone else's script is NOT going to work for you. Sure, it may have made them millions of dollars, but that doesn't mean that using it is going to get you the same results.

Rather than giving you another sales script that just isn't going to work for you, in this episode I share with you a structure for conducting effective strategy sessions or discovery calls...giving you a general outline that you can use to sell more effectively in a way that feels natural and authentic to you.

In Part III of this short series, I dive into the last three steps of an effective sales conversation: creating responsibility, highlighting the gap, and sharing your offer.

Today's episode is the third and final part of a three-part series on how to have effective sales conversations. In the previous two episodes, we walked through the overall structure for an effective strategy session or discovery call. Then, we dug into the first five steps of that sales conversation. What we're going to do today is talk about the remaining three steps. So if you haven't listened to parts one and two yet, I highly recommend listening to those before listening to this episode, and with that, let's go ahead and get started.

In the fifth step, what you did was work with a prospect to help them understand their desires—so their goals, what they want. Then in this step, in step six, what you're going to do is help them take responsibility for their future. It’s time to challenge them and help them to be honest with themselves about how committed they are to making a change. We do this because in order for someone to invest in transformation, whatever that transformation may be, they have to understand what's preventing them from achieving that change on their own.

It's also important to get them to emphasize to themselves the importance of the goal, and to be realistic about their level of commitment. This part of the strategy session does exactly that through these three simple questions. One is “You're currently at X situation, and you want to be at Y desired result. What do you think is stopping you from achieving that on your own?” Two is “On a scale of one to 10, how important is it for you to achieve that?” Then, question three is “On a scale of one to 10, how committed are you to making that happen?”

Your prospect’s answers to these questions are a critical part of the sales conversation, and you can't skip this part, because in many ways, they are the final qualifying questions to ensure that your prospect is not only an ideal client, but also someone who is ready to do the work in order to achieve their goals. If you work through these questions and find out that your client isn't entirely committed, chances are that they're not going to say yes if you share your offer with them. So this is a really important piece to help them take responsibility and really be honest with themselves about the level of commitment that they're ready to step into.

At this point, you are ready to move to step seven, which is to highlight the gap, and this is meant to be a perfect transition to sharing your offer with them in the next step; it really primes them for that. There are two parts to this step.

The first is to recap your prospect’s vision and obstacles. This can be as simple as “Just to make sure I have this right, you would like to achieve X, Y and Z; which would mean that you can do A, B and C; but the biggest thing that's standing in your way is Q.” The purpose of recapping your prospect’s vision and obstacles is to show them the gap, to highlight that gap between where they are and where they want to be, which highlights that it's going to be much more difficult if they try to do it alone.

There are a variety of ways to phrase this, but really, your recap should include these three core elements: the goal they identified earlier in the conversation, how achieving that goal will impact their life and other areas of their life, and then what’s stopping them from achieving that goal on their own. After offering that recap, confirm that you've got it right, so something like “Does that pretty much summarize it all? Does that sound right?” Then, let them know that this is definitely something you can help them with.

Then, you can move to the second part of this step, which is to ask one simple question that's going to transition you to the pitch, which is “Would you like to know how we can work together?” Obviously, there are a lot of different ways to phrase that, but really, the goal is to be as clear as possible and say, “Hey, we can definitely work on this. Would you like to know what it would look like to do that?”

At this point, assuming that your prospect has said yes, it's time to move forward to step eight, which is to share your offer with them, and to bring them on as a new client. When it comes to this part of the sales conversation, also known as the “close,” there are a million different ways to structure it. I'm going to offer one example here, but the more you experiment with what feels best for you, the more effectively you're going to be able to close new clients. For now, it's important to master these three most basic elements of the close. The first is to present your offer, the second is to get feedback from your prospect, and the third is to talk about the logistics and the actual investment.

When you are presenting your offer or your pitch, it's best to lead with the two most important aspects of your program: the result that it helps your clients achieve, and the process by which you help them achieve that. The formula for doing that is to say something like “My specialty is helping people achieve X (whatever that goal is), and the way I do that is pretty simple,” then share the process of what it looks like—the steps that you take all your clients through, high-level stuff. You don't have to get specific and nitty gritty quite yet.

While this doesn't mean that you need to pitch an entirely different offer to each prospect, it does mean that when you share your offer, it's important to highlight how each step addresses one or more of the specific pain points that your prospect has shared. If you're a fitness coach, and your prospect is really interested in upping their cardio game, you're probably not going to emphasize the part of your program where you help your clients establish a strength-training program. Now, you'll probably still include that as part of the process when working with every client, but it doesn't make sense to highlight that as part of your pitch.

The second piece is to get feedback from your prospect. After presenting your offer, it's important to pause for a moment and do two things: get some sort of feedback from your prospect, and answer any questions that they might have at this point. The best way to do this is to ask a simple question, something like “Does that sound like it would help you achieve X result?” The purpose of this question is to make sure that, before you even mention the investment, this offer is indeed a perfect fit. Because if it doesn't feel like a perfect fit to them, it's simply a matter of asking which parts of it are the most and least exciting to them, so that you can begin to identify how you can make it a perfect fit.

If you've accurately summed up their pain points, and you've incorporated them into your pitch really effectively, your prospect will most likely say, “Yeah, this is exactly what I need,” and once your prospect has said that, you can actually move into the logistics of how to get your prospect enrolled, specifically talking about the investment. You can just keep it really simple, like “Great. My program is 12 weeks long and the total investment, including everything we've talked about today, is $2,500.”

After sharing that total investment, shut up. Wait for your prospect to respond. This may feel a little bit unnatural at first or maybe a lotta bit unnatural, but it's important to give them time to absorb what might be a bit of sticker shock. If after a few moments, your prospect says they're ready to get started, then great, you've just made a sale. But more commonly, they'll say it’s a bit more than they expected, or it's a little bit out of their price range. In that case, it's wise to share any payment plans that you may have available.

This is the point at which one of three scenarios occur. Either they're ready to get started, they want some time to think about it, or it's a hard no. If they're ready to get started, it's always best to take the first payment over the phone via credit card, and to communicate what the next steps are for onboarding them as a new client. If they want some time to think about it, go ahead and book a follow-up call while you're on that call; get a date on the calendar for no more than a week later; frame it as an opportunity to check in, see where they're at, and see how you can support them. If it's a hard no, let them know that you truly understand and ask if you can circle back in a couple months to see how they're doing. If they decline, respect that. But if they say yes, it might mean that they're not a hard no, after all. They're just a hard no at the moment.

Obviously, what we haven't covered in these eight steps is how to address objections or concerns with moving forward—time objections, money objections, and things like that—and that's really, really closely related. But we're not going to talk about that in this episode, or this series, at least, because talking about how to effectively address objections could be its own little series, all by itself. And that little series will probably be coming soon, in all honesty.